For the first time in many years of using my Weather Station, I am completely disappointed about the lack of support. I have a ticket open for this since more than a week, but nothing happens...

I was accepted for the Homekit beta test (which doesn't seem to be beta anylonger, because Homekit is advertised officially, and the FAQ contains lots of Homekit related questions). I had an older HW version, so I received the discount code to order a new HWv3 station directly from Netatmo store.

When the new station arrived, I disconnected (or unpaired) all additional modules (rain gauge, wind gauge, 3 indoor modules) from my old station using the Module Manager software, and then removed the old station from my account. I then connected the new station to my account and added my existing modules to the new station. This worked flawlessly. I then asked Netatmo support to transfer my historical data from all modules, which also worked flawlessly. Then I enabled Homekit and started using the station in Apples Home app, which also worked fine.

After 2 or 3 days I noticed that certain modules stopped transferring data. When I checked the Station settings, I noticed that 3 of my modules (2 indoor modules and the wind gauge) showed up twice. One entry looked ok with correct battery status and reception quality icon. The other entry only had "?" signs for battery and reception. The displayed serial numbers were the same for the correct and the incorrect entry.

So I tried removing these 3 modules using Module Manager (also tried it via the iOS app later - no change). This worked, however, this removed only the correct entries of these modules. The incorrect entries were still there. I then removed all modules, performed the Homekit reset procedure (pressing the top of the main module until reg light), removed and readded the station from/to my account - nothing helps. When I now run the Module Wizard or go into the Add/Remove Modules section of the app, everything looks good:


No modules connected and ready for adding all my modules. However, in the Staion's settings there are still those 3 modules listed that I can't get rid of: 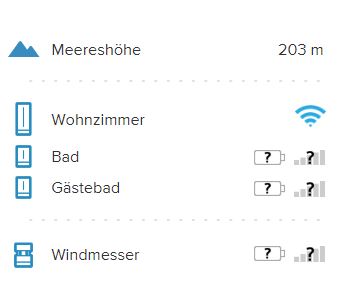 
I took the screenshot from the webinterface as it's easier to see than in the iOS app, but the modules are listed there as well.

It would seem like I would need a way to fully reset the main module to factory defaults, but there is no known way how to do that. A case is open with Netatmo support, but as said, no help so far. It's really frustrating...
Top

I had a similar issue. When you remove a module from a weather station after an hour or so it reappears on the website as "disconnected" and can't be removed.

As you already guessed it is not an issue with your station but an issue on their server. Resetting your station won't help. I contacted support and they removed these "ghost" modules for me.
Top

Thanks! As said I contacted the support as well of course, and I'm waiting for almost 2 weeks now, but no reply. Which is really surprising, because my past experience with their support is really good.
Top

Since there is still no response with regards to my ticket, I have just requested a return label for the HW3 station I got from the recently. Will sell all other modules via ebay. After being a Day-1 user since 2012, they managed to f*ck me off with this none-existing customer satisfaction experience.

I already bought 3 Eve modules (2 indoor, 1 outdoor). They don't have rain and wind gauges (yet), but honestly I never really looked after the rain and wind data that much, so no big deal.
Top

A Netatmo agent replied to your request various times, explaining that this case was under investigation. Sometimes, a few interactions and some time are necessary for an accurate troubleshooting.
Please, do not hesitate to reply to the last communication of the agent, if you still own the station and need help solving this bug.

Thank you for your cooperation.
Top

I have already responded to the agent that no help is needed anymore.

History of the case:

The agent forwarded the request to delete those ghost modules to some internal folks on 11/08/2019 and informed me accordingly. After asking for a status, I received a reply on 11/15/2019 that the issue would still be under investigation. Today (!) I received an email, asking for re-adding my main module to my account which I had already removed by that point in time. This makes a total of 17 days from reporting the issue, and it's not even sure that it would had been solved today if I would still have the station.

This might be acceptable for others - for me it's not.

Side note: I sent your sales support an email yesterday (contact-shop@netatmo.net) in order to get a return label. This email bounced back from your email server today morning. I resent the mail and received a confirmation that it arrived this time. And before you ask: I know that I should be able to print the label myself normally. But for whatever reason the order doesn't show up in my accunt. Maybe because it was paid with PayPal, where I use a different email adress. The order confirmation and the invoice were sent to that email adress that I'm using with PayPal, but there is no Netatmo account for that email adress, so no way for me to print the label myself.
Top

Hello Kay,
sometimes, we need to investigate thoroughly to identify and effectively fix the underlying issue, while communicating that an investigation is in progress.
However, we thank you for your feedback, useful to potentially reconsider and improve our processes.

Regarding your return label, an agent already contacted you to provide you with the most adapted solution.
Have a nice day.
Top

Yes, I was contacted in the meantime and have received a return label. Thanks!
Top

Hi,
Netatmo, I am about to do the same operation. Upgrade my v2 station to a new v3.
Can I expect to run into the same problems?
Will you provide a step-by-step procedure to follow so I don't run into this situation?
It would be good to know as I am using my weather station as source for my heating valve thermostats as well.
I think a proper procedure could save both yours and my time struggling with stuff like this. It would be quite easy for Netatmo to test and develop such procedure, I suppose.