All good for over a year with weather station - no problems. All web / stored data / apps / operation perfect until this afternoon.

Bought two new internal modules and connected them to the system a couple of days ago - all good.

Noted that the firmware of the modules was 37 against the current one of 43. AFAIK there is nothing I can do to update these, as I understand that this is done by the main unit as and when it wants.

Looking at my web app this afternoon, much data 'appears' currently missing (4 months), just one 'tiny one hour segment' at the end of each day left. Also the location of the station reverted back to a previous location (4 months ago, but not the Thermostat location) - I have since corrected the weather station location this afternoon back to the correct location - same as the Thermostat and where it should be. Station not (currently) displaying on map.

Further investigation shows that the two other (new) modules have upgraded themselves to firmware 43 - could be coincidence but something tells me not. Could the firmware update have triggered something to revert back the location to a previous place and perhaps render most of the data invalid? Data prior to the move of the weather station appears intact - October 2014.

Has anyone else experienced this?

Does the stored data (on Netatmo Servers) for several weeks come back eventually or is it lost forever? Not the end of the world, but if it doesn't come back - disappointing.

The unit has been performing perfectly for over a year, and I have never had to fault it or Netatmo before.

Anyone have similar experiences or ideas?

Many thanks in advance.

Interestingly using the Android App, full data is available for the last seven days, but on the Web Page interface, since it happened above, only for the hours between 10pm and midnight every day Between October 2014 and yesterday , and this for every every parameter. Prior to yesterday afternoon, all data, every parameter was fully available on the Web Interface since the station was commissioned, even after a site move.

Very weird, but even more weird - I thought I would check to see if the data actually still exists by downloading to Excel and sure enough it's all there, which points to perhaps a Web Interface problem?

Below is a picture of the problem. This is the same for everyday, for every parameter, since yesterday right back until October 2014. Before and after that data shows correctly in Web-interface.

I would really appreciate any thoughts / help / experience from anyone who has seen this before or of course a member of the Netatmo dev. team.

Many, many thanks in advance.

Everything is back to normal - I did nothing this end - how bizarre!

I can only conclude that perhaps some or all of the following may have caused this:

a) Adding two indoor modules (total three) two days previous to the problem occurring, and /or;
b) The two new indoor modules updating themselves from firmware 37 to 43, and / or;
c) The process of one or both of the above caused a location change to revert back to a previous (incorrect) location, and my action of correcting the location to the correct location may have triggered this, and / or;

And the resolution may have been one or both of the following:

a) Netatmo development team may have reset something to correct the problem caused by any or all of the above, but I have not received any communication to that effect, and / or;
b) When one or more of the processes / events above occurs, the Netatmo Server corrects the problem itself after approximately twenty four hours.

If it was one of the Netatmo team that sorted out the problem - many thanks indeed!!

If not, I guess if you happen to carry out any of the events above, and this happens to you (lots of missing data from the Web App and location change), make a large cup of coffee, and check the data and settings are correct, and then wait 24 hours and all should be good.

Hope this experience helps someone!

Case (for now) solved / closed, but if anyone else experiences it, it would be good / interesting to know..... 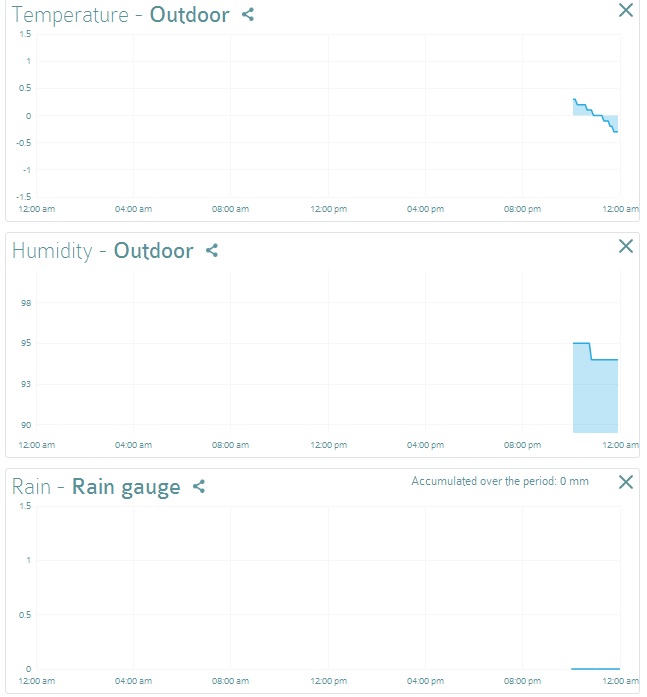 Hello,
Indeed we have manually fixed your problem

we're now working on being sure that it never happens again.
Sorry again for the inconvenience.
Brieuc - Netatmo Team
Top


Thank you very much indeed for resolving the problem - really appreciated and once again excellent support from Netatmo.

Out of a matter of interest, is there anything you believe (at this stage) I should have done or should not have done, to avoid triggering / causing the problem again (perhaps avoiding adding two indoor modules at once), or was it simply a Server glitch?

Once again, many thanks and wishing a pleasant weekend to you and your team at Netatmo.

Hello,
We think that while reinstalling the modules, the timezone has been switched to another, which created this unexpected behaviour.
Have a nice day too