Netatmo with old mechanical Honeywell and ability to move

You need some help attaching the thermostat to your specific boiler. This way please !
Post Reply
8 posts • Page 1 of 1

Netatmo with old mechanical Honeywell and ability to move

I have an old Honeywell mechanical thermostat with a three wire connection. This is connected to a 7day timer that controls hot water and central heating.

If that works then should I set the central heating to 'ON' permanently, rather than timed, at present, or doesn't it matter?

I also have the weather station. Unfortunately the outdoor sensor isn't talking to the indoor one (due to range). Once I fit the thermostat (which is closer) do you think it will work (I'm wondering if Netatmo devices create a mesh local network, apart from the Wifi.

Finally both the weather station and the thermostat only came with European plug connections (I bought them in the airport in Paris). Is there anyway of supplying me the UK 3 pin connections for the USB power supplies?

You should be able to connect the relay in the manner you suggest (this is what I've done). However, if all three of the original wires were actually in use, you may need to add an external relay (there are posts on here that discuss this) because the Netatmo can only make (or break) a single connection when it needs to demand heat. This will depend on the requirements of the timer.

You should set the central heating on your timer to "On" all the time, yes.

I don't think placement of the thermostat will help your Weather Station comms. My understanding is that the communication is done point to point over a relatively simple (non-wifi) radio link.

The thermostat, I think, always runs on batteries (even if it's attached to the wall) and the relay runs on 240v (which is the obvious choice if it's near the mains wiring that you're likely to have where your thermostat cable comes from)... so I'm struggling to remember exactly what the Thermostat power supply is for. I don't use it, anyway. If all you need for the WS (which I don't have) is a USB power supply, a generic one might be more cost effective than ordering from Netatmo!
Top

Thanks very much TypeC!

Here's some pictures of what I have

Time to dig out the manual for the Drayton 7 day programmer and see what it needs....
Top

There's typically a junction box which the various components of a heating system connects to. This is where your thermostat should be wired to and (despite what I said about your programmer being the limiting factor above) will probably determine whether you can use the thermostat with only two wires, since the manual for your programmer seems to suggest it doesn't have an interface for a thermostat (and, actually, I think this is normal).

Are all three of the wires actually connected in your thermostat?
Top

Ok have investigated further. In fact you're right, despite three wires going into the old thermostat, only two are connected - red and white.

Red is powered with 240V when the Drayton 722 timer selects CH otherwise not. So I guess if I put the Netamo thermostat there all will be fine.

If however I want to put the relay there I'll need a way to get power there. The un-connected blue wire is a possibility - I can wire this to the mains at the Drayton 722. However I'd need an extra wire for neutral (which I don't have) and this would be a bit of a pain to try and thread through the wall, so maybe I'll just stick with with putting the Netatmo on the wall...

On the other hand I could just locate the relay next to the drayton and run the power and control wires there, stick the Netatmo on the wall not connected to any wires (conveniently covering the hole) and then just move it when I want to...

Here are the pics I tried to upload earlier for anyone interested... 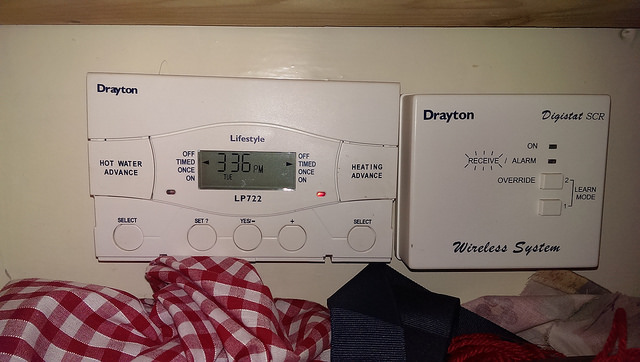 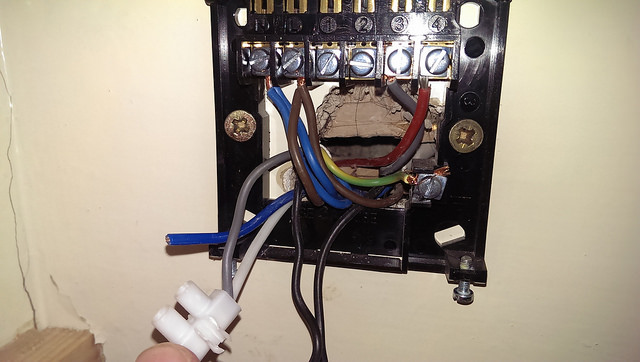 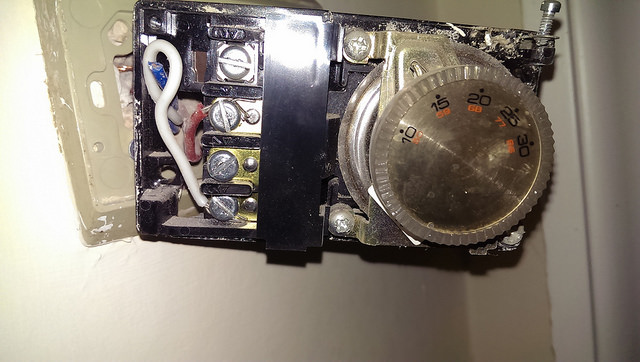 Alternatively I could connect the unconnected blue wire to neutral. The relay should then work if it gets the power from the red wire, which it will do providing the timer is set to ON all the time... Will check the instructions for the 'relay'
Top

Is it the white wire from the thermostat which is connected to a grey wire in the terminal block? If so, it seems your thermostat and programmer are connected in series with the control lead to the boiler, which would make sense. The installer neglected to go down the route of the more traditional junction box, but you've got everything you need here.

It seems to me that you've got a few options (and you've already thought of most or all of them, I think):

1. Replace thermostat with relay, bypass programmer. If you send power through the red and blue wires, join the live to one side of the relay's switch contacts and the white to the other side, everything will work and you won't have any problems with power to the relay because the programmer is out of the loop. The downside here (if you see it as such) is that the programmer can no longer override the Netatmo, just in case you wanted a physical off switch for your heating.

2. Replace thermostat with relay, power relay only when programmer is on. Wire it up as you suggest (again with a link wire between live and one switch contact on the relay) and leave the programmer "always on". I don't see a problem with this, except that if someone accidentally puts the programmer into a timed mode, your heating could start to behave badly but in a manner where it is not immediately obvious there is a problem. I'm sure it goes without saying that because of the Netatmo's constant "learning" feature, it ought to be powered all the time.

3. Mount relay with programmer. Mount the relay next to the programmer and take the relay cable straight into the terminals behind the programmer. This way you can choose exactly what behaviour you want. I'd go for putting the relay switch in place of the existing thermostat (i.e. remove the red and white wires and put the switch wires from the relay into the same places on the backplate and terminal block). You can then choose to plaster over the old position, mount the thermostat there, etc.

4. Replace old thermostat with Netatmo. Mount the Netatmo on the wall and connect the red and white wires to its switch terminals. You are then free to connect the relay by simply plugging it in (or wiring it in, since you don't have a uk plug at the moment!) anywhere in the house where it will be in reasonable radio contact with the thermostat and router / wireless access point.

FWIW, I was in exactly the same position as you with regards to wiring (3 cores through wall, only 2 used) and I took option 3 along with plastering over the old position (it wasn't the best place for a thermostat in our house anyway) and I'm quite happy with the decision.
Top

Thanks again TypeC. I went for option 3 like you. The old thermostat is still there though! Shame I told my wife about the Netatmo. Would have been quite fun to have let her think the old wall thermostat was still connected.....

Return to “Attaching the Thermostat to the boiler”