I think my new thermostat is needing a little calibration, as it is obviously not calculating the good ambient temperature.
Is there any way to achieve this ?

In the Advanced section of the Web site and phone app., you can "Force a Temperature Offset" to do this. However, you need to make sure that the room temperature has stabilised before doing so, as the Netatmo thermostat suffers from a lot of Thermal Lag.

It appears that no one told Philippe Starke that the temperature sensor needs to be in the air that it is supposed to be measuring ... the Netatmo sensor is buried deep inside ... somewhere (I couldn't find it). The result is, that it often displays a quite different value to other temperature measuring equipment placed in the same location.

The PID programme appears to compensate for this lag to some extent - seemingly switching off far too soon - presumably, because it knows the thermostat data is lagging behind reality...

As a test, I placed the Netatmo thermostat in the fridge and let it warm back up to room temperature. At the same time, I recorded the results from a few other sensors: an expensive TFA Dostmann 'Klima Guard', a cheap Imagintronix XT200 and a simple DS18B20, connected to a Picaxe.

(Click image for full view. X axis is in minutes, Y axis is in degrees c) 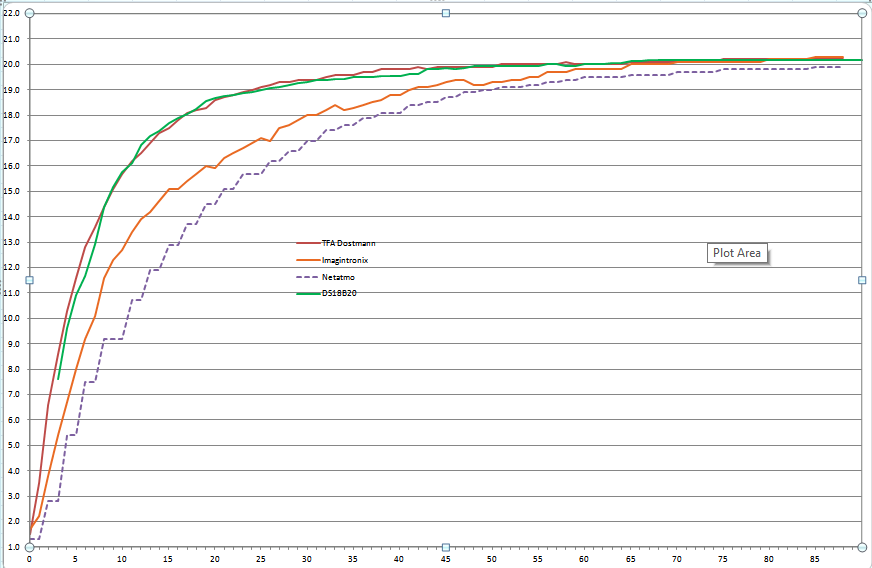 I thought I'd add some comparison data for the Netatmo, in use.

The readings from the Netatmo, seem to bear only a passing resemblance to reality!

Note: The fact that the actual numbers from the two sensors are different, is NOT an issue ... sensors do vary in their accuracy; but the fact that the Netatmo does not respond to changes in a timely manner, definitely is. (I have used DS18B20 digital sensors many times - I am very familiar with their use).

The Blue trace explains why I started feeling chilly, as the evening wore on - despite the Red trace (Netatmo) saying that everything was under control.

Thanks, this does not sound very good...

Whilst on the one hand the gap in the measured temperatures could be compensated with the offset, on the other the offset could even further slow down the response of the PID to the temperature changes.

I would expect someone at Netatmo to comment on this thread.
Top

I had another play with this - this time using Hysteresis mode.

I've superimposed my recorded data, over the top of that shown in the Netatmo Web App. Once again, the Netatmo data did not match 'reality' (as measured by the DS18B20 Digital Sensor):- 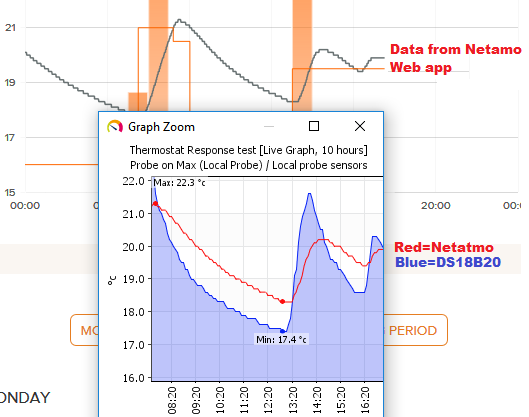 I'm going to remove the Netatmo for a while and measure the performance of my original Room Stat, and see how that fares.
Top

I have re-instated my previous thermostat - a Landis & Staefa aka Siemens CE1N2222E REV 11, designed in early 1999 and purchased by me in about 2004. You wouldn't think such an ancient device would come close to matching the Netatmo, would you?

Here is a temperature log of my house, with said device back in control. Set Point is 20.6°c, programme ON time was 06:30, mode was "PID6". Temperature, once again, measured using a DS18B20 in free air (positioned on top of the stat.) 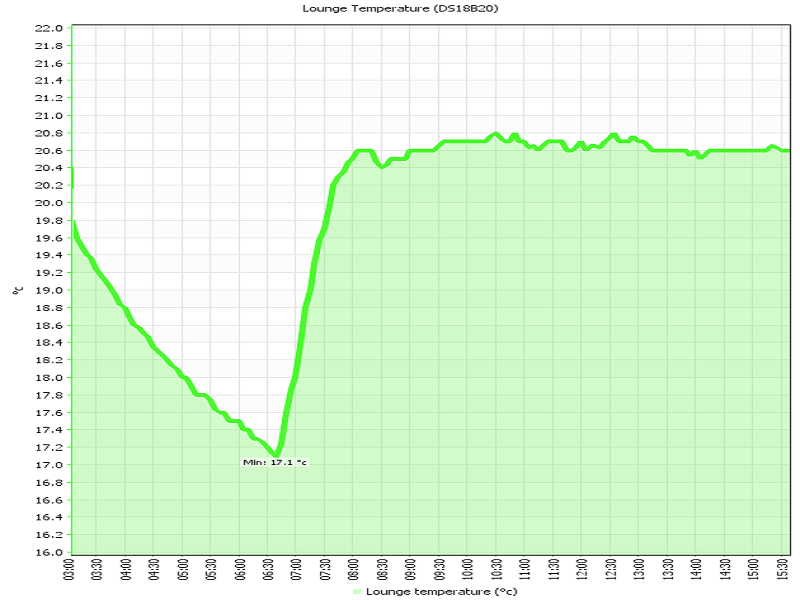 Just in case you've not appreciated the difference - look at the scale of this graph, compared with the previous one. A slight ±0.2°c wobble, rather than the wild 3°c lurches when the Netatmo was in charge!

I might wire the two thermostats in parallel, and let the Netatmo use its Predictive algorithm to bring the house up to a reasonable temperature - then let the Siemens take over and maintain it. Or I might drop the Netatmo in the nearest dustbin and go buy a Nest instead...

Thanks for the great reports, PhilHornby. In fact it would be interesting to use this approach to compare Netatmo with its real market competitors...
Can you guess the results?

It's interesting when you read the reviews of all the smart stats on the market - no one seems to have thought to test the actual temperature sensing functionality; there's an assumption that that's the easy bit, and it just works...

...I've got some more stuff to post, when I get a minute. I took the thing apart and photographed it; then drilled a series of large holes in the casing. I'll report back later...
Top

See the following collection of graphs :- 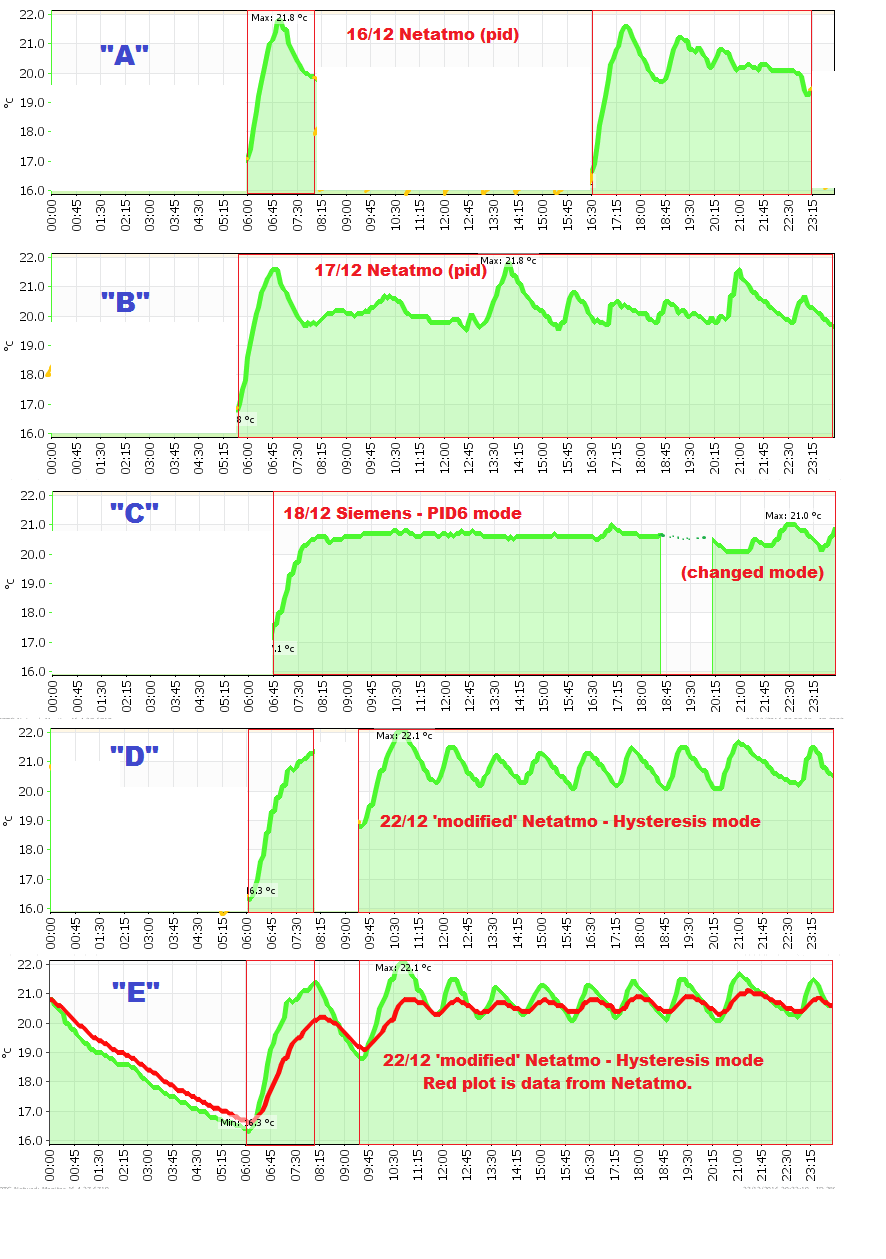 In each case, the 'green' trace represents the actual temperature (as measured by a DS18B20 in free-air, next to the thermostat).

"A" and "B" are the un-modified Netatmo stat., supposedly in PID mode.
"C" is the impressive performance of my ancient Siemens stat., in PID mode.

After a drilling a series of large (8mm) holes in the outer casing of the Netatmo, and a myriad of smaller holes in the internal structure, graph "D" shows the performance of the Netatmo in hysteresis mode. It is probably only fair to give it a chance to learn the new characteristics, before posting its PID performance.

Graph "E" is a repeat of "D", with the Netatmo measurements overlaid (in 'red'). I think this shows an improvement ... it is missing the temperature peaks, but it is at least following the temperature fluctuations without appreciable lag.

It occurred to me, that every other room stat. I have ever examined, has air vents. Normally, if you peer through these holes, you can see the thermistor (or other sensor), that is taking the actual measurement. The Netatmo design has the PCB virtually encapsulated in 2.5mm thick plastic, with seemingly no thought to air-flow. I can't even find a dedicated temperature sensor on the board.