With the new app, I hoped there would be a fix for some astounding functionality lacks on the Homekit integrations. Unfortunately not.
What's baffling is how simple it is to fix it and you would provide your users with a complete feature set to rival any other thermostat in the market.

Add the scene modes to the Homekit control.
The current "Heat on/off" is ridiculously useless. Instead, take a hint from Honeywell Lyric and add "On/Away/Frost guard/Off".

This alone will solve the manual setpoint limitations that most people here have if they try to use Homekit geofencing. If I go on holiday, then the temperature will lower to 18 degress for 12 hours, then return to normal modus. A waste of energy. Allowing me to set it to Away, solves the problem.

IOS 11 comes with multi user capability, which makes it easy to make a scene where "When everybody leaves set thermostat to Away" or "When someone arrives set it to normal schedule". It's a month away.

IFTTT integration not only sometimes misses the location change and let your home heating like you were there, but also makes impossible to manage other home inhabitants. Someone will have to manually set it back from away if comes home before me.


So here is my little suggestion which would make me stop thinking about buying a Tado and selling my Netatmo. Add scenes to Homekit (or, less elegantly, just make infitine manual setpoints possible) 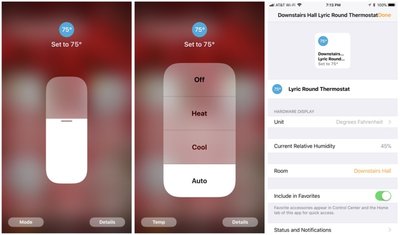 I agree with carloscae, it would be interesting to include more operating modes inside HomeKit: On / Away / Off would be enough.

Please include them.
Top

Up, to make it visible again.
Hopefully we’ll get a response from Netatmo.
Top

This would be really helpful
Top

I bought the Netatmo because of the available radiator valves and HomeKit support. I stupidly assumed that HomeKit would be able to switch modes. Please add this soon!
Top

Unfortunately HomeKit does not allow to present away or frost guard mode for a Thermostat, this is why you don't have this possibility in HomeKit when you have it in the Energy Application.

From the capture you present, we can see the same for the Honeywell Lyric. It is only allowing you to have "On/Heat/Auto/Cool". Our Thermostat does not present Auto and Cool because we only control heating system and not cooling one.

I have to agree, it is rather inconvenient.

If you change the temperature, it will only last for the manual boost period set in Netatmo. So if you go away for the day, I have to go in to Netatmo app and set away mode.
I have automation set in homekit to change the temp when both my wife and I are not at home, which works partially because of the above. So no real automation.

Is this a feature that can be implemented, or a limitation of Homekit? And if possible, more important, is it on your roadmap.
If not, can you at least have the option for schedule overwrite the manual boost, I know that also won't work in all situations, but easier to work with in Homekit.

I found this thread while investigating prior to my purchase.

I believe the initial suggestion is entirely possible with HomeKit.

For example, the NanoLeaf Aurora HomeKit light - you can use HomeKit to change between scenes in which different effects play out (with more variation than basic HomeKit can achieve).

The Scenes are added to HomeKit from the Nanoleaf app.

I’ve done a bit of investigating and I believe the way it’s doing this is to expose a custom HomeKit characteristic - which won’t show in the HomeKit app.

However, if you generate the scene in your own app then you can manipulate whatever characteristic you want (set the mode to away). Then HomeKit will treat it like any other Scene and allow timers & GeoFencing etc.


I downloaded the “Ezzi Home” HomeKit app which shows even the characteristics that probably should be hidden.
Turns out I was right, the NanoLeaf Aurora has additional custom Characteristics which don’t show up in the HomeKit app, Animation (& firmware update, panel discovery etc).

The scenes which are generated by the app send updates to the custom characteristic and bingo bango there’s your mango.

Should be possible to have “Away” etc as a similar custom characteristic then allow the user to add the scenes from within the iOS app? I’d think anyway.

Bumping this as is the killer feature that is missing.

Suggested elsewhere even if the only available modes are toggle on/off, surely these could be 'mapped' to different modes within the Netatmo app. E.g. if homekit says thermostat off, set to away mode.
Top

This issue has prevented me adding my Netatmo products (valves and thermostat) to location based automatons, which has resulted in the house heating up when nobody was at home many times.

I agree, instead of 'off' if the thermostat interpreted that as 'away' that would solve the problem for me.

Also can Netatmo present multiple valves in the same room as one thermostat to Homekit? That would make the Homekit interface neater and automatons simpler.
Top
Post Reply
10 posts • Page 1 of 1