by PetrM
I have calibrated anemometer from testo, I take fan and measured for 30 minutes constant speed around 11 m/s (36 km/h), Netatmo anemometer measured only 25 km/h,
Accuracy is extremely poor. All was measured inside the home, temperature around 22°C

by deeayy
The latest version of firmware introduced a new anemometer calibration setting. Here you can adjust settings for how high you have it positioned above the ground. This will affect the recorded wind speed. Changing the settings here may help with the accuracy.

Bear in mind that official wind speed is measured at a height of 10 metres above ground in a clear field with no obstacles. It's unlikely your setup will be like this meaning trees and houses, etc. will have an effect on the overall measured speeds (lower), especially if mounted above a roof.

by PetrM
Yes I know about settings, but I measured direct wind speed from fan (diameter 200 mm) calibrated Testo anemometer shows about 10 km/h more than netatmo anemometer with the same conditions

by xjs
Hi,
also have problem with wind gauge altitude correction. As living in a 7 story building, i'd like to modify the base 10m height of the unit, but I can only correct it lower but not higher. When the height shows 10m than the plus sign disappear.

by avogadro
My new wind gauge is also giving readings which are FAR TOO LOW e.g.
Met Office 24 gusting to 42 MPH
Wind gauge 7 gusting to 13 MPH
The wind direction, measured by the wind gauge, is correct.

My wind gauge is mounted on a fence post, about 3 metres high and well clear of any obstacles. 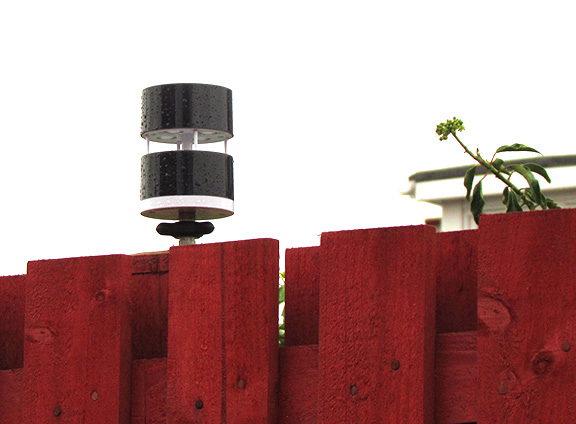 Reference to the Netatmo Weathermap will show that others are having the same problem.

Netatmo support have done a firmware update (currently 11) and suggested I set the height to 0.01.
Neither suggestions have worked.

There is obviously something fundamentally wrong with either the firmware or the unit itself. Please report this problem to Netatmo.

by jobo
@xjs: the Problem is that a wind gauge normally should be installed 10m above a free area, like a field. An Installation between Buildings or so makes not really sence. In an area with buildings the Zero value is not the ground, but may be the top of Roof.
I think the best method of calibration is to give a difference value between the own measured value and the nearest meteo office value.

by mariner01
I have just installed my 'new' Netatmo anemometer.
Whilst the new design looks very futuristic and smart I am disappointed in the readouts.

The graph (when zoomed in) is only updating every 5 minutes. However, if the graph page is left open it does not update at all. The only way I can get it to update is to reboot the Netatmo App. Surely this is not right.

The digital readout is always very low (3mph) in spite of gusts reading 14mph, which is still too low according to other local stations - 25 - 40mph!
Unfortunately this is the poorest anemometer I have owned. I have found all the other Netatmo instruments to be very good and all in good working order, which is why I bought the anemometer thinking it would be of the same high standard.

The sample rate is far too low (long intervals).

I emailed this 'problem' to Netatmo but was told that the system is for home use and not professional. Sorry but that is not a very professional answer. There are many enthusiastic weather buffs in the world, upon which the professional met stations relay on for local readings.

Wind readouts are VERY important especially with the weather we have been having in UK and Northern Europe!

I'm glad I am not the only one with problems.

Unfortunately I am seeing the same problems as most other people.

I tested my wind speed sensor alongside an Aanderaa Wind Speed Sensor 2740EX (fully calibrated with TSO Certificate). I found the same results as most people on this thread.

Whilst I appear to have been lucky that my sensor has not died yet in the rain (or reported hurricanes on a calm day), the speed data is about 51-55% out, whilst the direction data is spot on. I can understand Netatmo stating that this is not a professional device, but errors of this magnitude are not useful.

Interestingly the error was linear throughout the speed testing range, meaning a correction factor could be applied to the data to give a virtually correct resultant throughout all speed ranges. I have tried the calibration section in the settings (right down to 0.01 as suggested to Avogadro by Netamto), which should give a 30% correction, and it does help, but more is needed. For the avoidance of doubt, although not relevant in calibration testing, the device is mounted 10 meters above ground level (on a comms tower), in an open field environment, with the nearest obstruction 2km away; this originally alerted me to the massive under-reading - there was no explanation for it other than the device itself.

Netatmo appear to have problems when first launching products. I remember the Rain Gauge with many people having similar problems. You would think that a simple bucket mechanism would not give widely varied results and require large correction factors from device to device, but they did and still do; myself resorting to having to use 1.57 instead of the factory 1.3, despite being told this should work. I have seen people using anything from 1.1 through to 1.7 to achieve correct calibration.

I am a great believer in 'no data at all is better than bad data'. However I think perhaps there are subtle variations in manufacture of the wind gauges (perhaps causing subtle ultrasonic differences from the production test models?), and a simple and proper calibration factor ability in the software would perhaps solve this?

Anyone else have any thoughts on this or anyone at Netatmo?

by mariner01
Hi Mendip
I have yet to see one good report about this wind gauge. I have also yet to see a proper spec for this system.
One can get a conventional anemometer (cups and vane) for the same price and have it work perfectly.
I guess from your handle you are not far away - I am in FOD.
All times are UTC+01:00
Page 2 of 3