When is it expected to be working? It’s still a feature that’s mentioned on the website, so it seems like a defect that it’s not working currently.
Top

Is this (open window detection) part of the new firmware (V.66)?
Top

Hi,
No, the Open Window detection is not part of the latest v66 firmware.
This feature will be available soon, thanks again for your patience.
Brieuc - Netatmo Team
Top

Schatzi wrote:Do not urgent the future. Give it time to release it when it works properly. I don't want a future full of bugs. I'm ok waiting and knowing it will come. It's allmost the end of the winter, why should hurry?

But now winter is on the doorstep again. Nothing to be seen of the promised function far and wide. There is not even an announcement. Already weak, I must say, if a feature already promised with the introduction of a system a year and a half later is still not available.

There is also no reaction about the function intended by the users (!), to transfer the indoor temperature from an existing netatmo weather station to the radiator thermostats instead of the internal temperature recording, which is quite problematic depending on the installation situation.

Also the function "Monitor consumption" already shown in the software has been set to "Shortly available" for a long time!

All in all, as a customer who has paid a lot of money for the system I feel a little bit fooled and I am already thinking seriously about replacing the system with another one that works (better).
Top

Brieuc_Netatmo wrote:Hi,
No, the Open Window detection is not part of the latest v66 firmware.
This feature will be available soon, thanks again for your patience.

Sorry but this is terrible customer service, you could at least be somewhat open about what is going on. In most countries this borders on, or is, fraudulent marketing.
Open Window Detection and reading outdoor/indoor temperatures from the weatherstation are absolutely critical features, without they are just dumb valves that do very little extra but at a high cost. While Tado is more expensive, they seem to have their sh!t together and have produced a fairly solid product.

You're making it very difficult to be enthusiastic about your products.

I'm am close to requesting a refund.
Top

This feature has been promised for at least a year now. When are we getting it please? I've invested a lot of money in your system and it seems you don't care about your customers once you have their money. Sort it out Netatmo!
Top

I bought a Xiaomi Aqara Window Sensor (10$, works with Apple Homekit), set-up an automation and turns-off a valve as soon as a window is opened...
This is how it works: 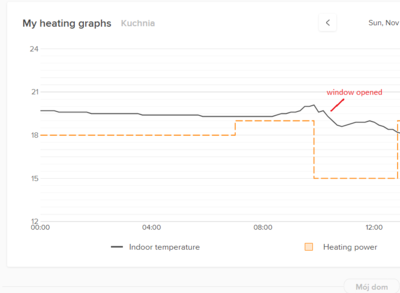