I'm having a strange valve issue in our bedroom. We have 6 valves that have operated perfectly since March. Now that it's getting cold again, the temperature on the bedroom valve is often off somewhere between +2°C and -4°C, leading to room temperatures between 19°C and 25°C when actually it should keep the room at steady 23°C. I tried playing around with True Temperature, but it didn't help.

Now here comes the interesting part: I thought the valve was just broken, so I switched it with a valve from another room. The result was that the "new" valve in the bedroom had the same issues as the old one, and the old one worked fine in the other room. I tried this one more time and switched the bedroom valve with the one in the living room with the same results: For some reason, valves in the bedroom sense a wrong temperature, often staying well below the set temperature and heating the room for hours, and other times just stopping to heat and not turning on thinking the temperature is ok, while the actual temperature of the room becomes way too cold.

To clarify, the temperature sensor on the valve shows a wrong temperature. If I use True Temperature to correct the temperature, it temporarily works again for a few hours until the problems start showing up again. It is not an issue of the thermometer I used to measure the correct temperature, as the difference could be clearly felt (for example, the 19°C instead of the 23°C that the valve showed were obvious when entering the room).

Right now I have taken the valve off the radiator and installed the original low-tech valve which seems to be working fine, but of course it can't tell the thermostat to turn on the boiler when it's cold in the night.

Since the thermometer right next to the radiator measures the temperature correctly, the old low-tech valve works fine, and multiple valves are affected only in this room, I suspect an issue with the firmware. I'm quite tech-savy with experience in coding firmware and soldering, so if there is anything else I can do to try and troubleshoot this issue please let me know.

Additional info that might lead to solving this mistery:
Top

I tried this: in the app move the valves from one room to another one. I've seen that temperature readings changes. THIS is strange, isn't it?
I suppose that some correction is in the "room" and not only in the valve.
NETATMO, is this true?

so if one valve start measuring very wrong value, delete the room in the app and create a new one. than you need to be patient because you have to establish the "true temperature" again
Top

I had a similar issue yesterday with two valves (I have 6 valves in my house)
The first one suddenly raised the temperature from 21.4 to 25.2 in about 30min (see picture red arrow), The valve was not open when the issue appeared. Then I corrected with true temperature option (blue arrow).
The second valve has a similar issue. About one week ago the temperature dropped suddenly by 3 C° in a few minutes.
The other four valves seems to work correctly for now. All the valves are on firmware 81.

Are the valves broken or is a firmware issue? 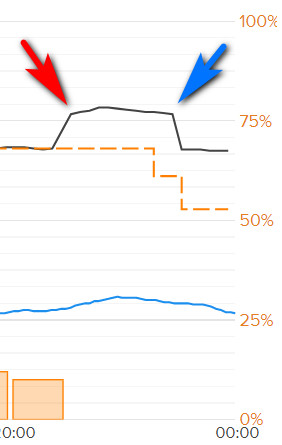 I'm reporting this problem more than 2.5 years. No real fix in place. Also opened service request. How can operate valves, when temperature is wrong? Absolutely useless.

My tip for you, reinsert batteriest to get correct temperature.
Top
Post Reply
4 posts • Page 1 of 1