Uncommanded Heating - Triggered by Outside Temp

Uncommanded Heating - Triggered by Outside Temp

Got some strange behaviour. Over the last couple of weeks I've fitted a new Relay/Thermostat and 9 Smartvalves. Apart from constantly losing connection with the server and all the normal issues which are now solved I'm getting uncommanded heating in most of the rooms. 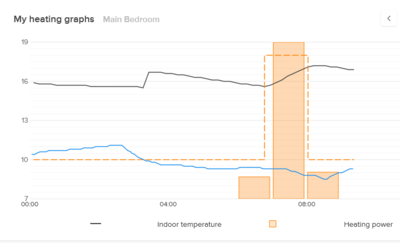 At 02:45 the outside temperature drops to 10 degrees, the Setpoint for my Night mode. The temperature in the Main Bedroom (and also the Study) rises markedly for about 90 minutes then starts to fall again but no heating demand shows for any Valve or the Thermostat. I heard the valve cycle in the bedroom as it is very loud and it took me a while to work out what was going on. This is the second time I've had this when the outside temp hits my indoor setpoint. It markedly affects 2 of the rooms but most show some form of temperature rise. The relay is on Firmware 152 (it happened last week on 150 as well) and all the Valves are on 41. I have been using the Hysteresis algorithm as it is a new relay and my years of data disappeared when I installed it. I'm going to try the Advanced algorithm as first step to diagnosis but can't use Predictive Heating as it fires up the heating around 3 hours before we want it in the morning and my wife does her nut as it wakes her up so I can't let it run for long enough to establish parameters. I was under the impression that only the predictive operation used outside temperature?

I'm waiting on a response from Netatmo Support but wondered if any one else had experienced this behaviour?
Top

Hi,
Thank you for your feedback.
What can be seen on your screenshot is an automatic adaptation of the temperature measured by the Valve. We can see there is no heating activation as there is no vertical bar around 3:00am.
We are working hard to improve the precision of our algorithms to provide you with a better experience as soon as possible.
Brieuc - Netatmo Team
Top

Ok, thanks for that.

Does that explain why the Valve sounded like it was re-calibrating itself at the same time? This is the second occurrence at about that time of day and it wakes my wife up - she is not at all happy! I had to remove the valve last time it happened and fit the old TRV back. Managed to convince her it would be ok after I cleaned the valve body and re-calibrated. Unfortunately that doesn't seem to have stopped it. I'm hoping it will eventually settle down.
Top

Valves are designed not to calibrate at night.
So something else may have happen. Please check if the batteries are properly inserted and the hatch properly closed.
If it ever happens again, please open a ticket in our Assistance (https://www.netatmo.com/helpcenter/) to let us investigate.
Anyway, this is definitely not related to the outdoor temperature, there is no possible link so it is just a coincidence.
Brieuc - Netatmo Team
Top